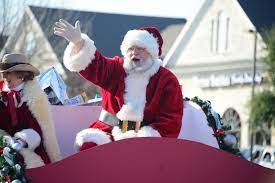 Santa Claus is coming to town Dec. 5. The fun starts with the annual tree lighting ceremony at 6:15 p.m., followed by the parade at 6:30. Santa will begin his journey down Adams Avenue at 7:20 p.m. The nearly 1.5 mile parade begins at the intersection of East Adams and North 8th Street/MLK Boulevard, then proceeds west along Adams past the Municipal Building and Downtown, all the way to North 23rd, where it turns north. The parade ends and disbands at Temple High School. City crews will begin preparations by closing portions of 6th and 8th streets for parade entries to gather and line up. Beginning at 5:45 p.m., Adams will be closed to traffic along the parade route. At 6:15, Mayor Tim Davis will light the tree and surrounding holiday decorations to officially kick off the Christmas season in Temple. Fifteen minutes later, the parade will begin with entries by community groups, schools and businesses around the city.