THE ART OF ROCK

A Temple man with deep rock ’n’ roll roots has created concert posters for hundreds of bands, including Van Halen, Alice in Chains, Judas Priest, Metallica, Willie Nelson, David Bowie and The Cure, and he will be the featured artist at a new Temple College Visual Arts Gallery exhibit.

The show opens Feb. 4 with a 6-8 p.m. reception featuring the award-winning art and music of Billy Perkins, a former student at the college. The exhibit will run through March 10 and will feature about 45 concert posters.

“This is a big part of what I do,” Perkins said. “When I was younger, I was really into drawing comic book characters. I loved rock music — KISS and Alice Cooper were my bridges from being a comic book nerd to drawing music-related art.”

Perkins was born at King’s Daughters Hospital and attended schools in Temple and Belton. After spending decades in the Austin art and music scenes, he returned to Temple in 2021.

“I always loved art,” he said. “When I was a kid, there was a store in Town & Country Mall that sold posters. They had a black-light room in the back, and that psychedelic style really caught my eye. I used to go to a lot of head shops and check out the artwork. They had these crazy colors that popped. I wanted to do that — it just felt groovy.”

Perkins started free-lancing as an artist back in 1992, and he admits the road hasn’t always been smooth.

“There have been multiple dips, that’s for sure. For the first 10 years, it was a struggle to pay the bills. I would have to create work to make ends meet, and that meant creating a lot of t-shirt and poster designs.”

Perkins and a former employer were designing t-shirts for the Chuy’s Tex-Mex franchise back in the 90s, and the popular restaurant would sell more than 4,000 t-shirts every month, he said. The employer eventually folded, but Perkins kept providing designs. Chuy’s was known for its off-beat shirts, and many of those were created by Perkins.

“I helped them get strange,” he said with a laugh. “Chuy’s needed artwork, and I kept making myself available.”

“Back then, the posters were put up in bars and restaurants around town to promote shows,” he said. “They are still popular. I have a bucket list of musicians I would like to design posters for — but right now I’m working on a big poster for Widespread Panic.”

In addition to his artwork, Perkins is also a musician.

“I’m in a heavy-metal band called Butcherwhite,” he said. “That’s the color of a butcher’s apron. They start out white, but they are destined to get blood on them. Our music is heavy and not really innocent.”

“I call Butcherwhite’s sound Camaro music. It just sounds like something you would listen to with the windows rolled down and the volume cranked up.”

While Butcherwhite is popular with the metal crowd, expect something entirely different at the Temple College reception.

“I also do singer-songwriter sets with my childhood friend Donna Reynolds Kennedy,” he said. “Donna and I used to walk to school together. She plays the piano and I play an acoustic guitar. We do a couple of covers, but mostly original stuff — I have 20 years worth of songs. What we play is very different from Butcherwhite.”

In addition to concert posters and high-energy music, Perkins also is known for his album cover designs.

“I’ve done album covers for many Austin-area bands,” he said. “I just did one for Jack Ingram. I designed one for Cheap Trick and they were going to use it, but that album project got shelved and it was never released.”

“I’ve been doing artwork for Cheech and Chong since about 2008,” he said. “I’m not sure what all I will have on display at the Temple College exhibit, but it will be a good selection. I’ll have a few available for purchase.”

The popular artist credits two local educators as mentors who helped shape his passion for art.

“Bill Smith and Michael Donahue taught me a lot,” he said. “I truly owe them a debt of gratitude for my pursuing a career in art. Bill was my high school art teacher — he’s retired and living in Salado, and Michael was the Temple Junior College Art Department chair when I was in school.”

Perkins has been honored by the Austin Music Industry Awards as a five-time winner in the Best Concert Poster division, the Best Album Art division and the Best Poster Artist division. 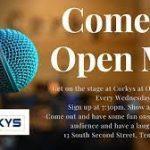